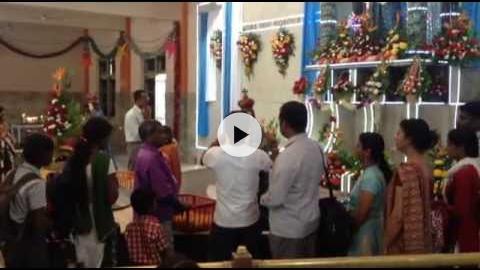 The Miraculous Infant Jesus Church is a popular shrine celebrating the image of the Infant Jesus of Prague, a devotion imported from the Czech Republic. The parish and shrine are relatively new, having been established in the late 1960s, but the site draws large crowds for its nine Thursday novena Masses to the Infant Jesus, and the seven Sunday Masses. The church serves a primarily Tamil speaking community, but also has Masses in five other languages.

The shrine’s motto, “The more you honour me, the more I will bless you,” is a surprisingly mechanistic perspective on prayer, is but one that taps into a deep strain of Indian religion, emphasizing worship, an exchange-based relationship to God and blessing and prosperity as the goal of spiritual life.

As an example, during one visit there, two women were standing in front of the church, praying for the return of properties they had lost to bulldozers clearing a nearby slum to make way for the construction of a new shopping center. The women held documents that gave them title to their land, and pointed out that among the pictures of politicians on a large poster facing the shrine, asking blessing from the Infant Jesus and greeting the shrine’s feast, was the very politician now in the papers for taking huge bribes from the wealthy and displacing many poor people. He had, they claimed, illegally demolished their homes, but police were standing by to prevent the return of inhabitants. Here at the shrine, the women were eager to talk to anyone who would listen, and were now putting their hope in the Infant Jesus for a new home.

This incident points to the degree that a mechanistic perspective on prayer often seems close to subsuming an ethical perspective on faith in India, allowing ritual and worship to take precedence over ethical living.1