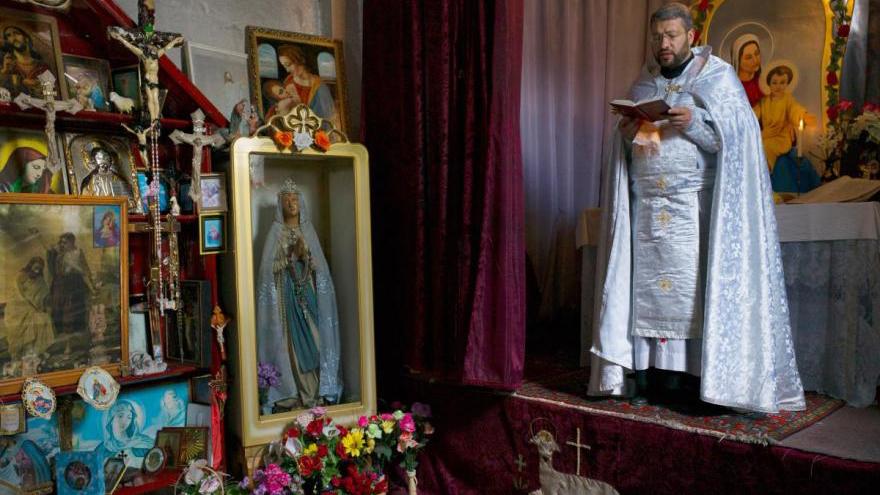 Armenian Catholic liturgy in the Surb Hovhannes (St. John the Baptist) chapel in Metsavan, Armenia. The interior of the temple is filled with votive offerings presented by the faithful. Photograph by Konrad Siekierski.

Believers of the Armenian Catholic Church, one of the Eastern Catholic Churches, are dispersed throughout the world. Their most numerous, and at the same time probably least known, group lives in Armenia and Georgia, especially in the provinces of Shirak and Lori (Armenia) and Samtskhe-Javakheti (Georgia). Scattered in a 200-kilometre-long belt among the mountains of the Lesser Caucasus are several dozen Armenian Catholic villages. The ancestors of their inhabitants moved to this area in the mid-19th century from their historic homeland – Western Armenia, which then formed a part of the Ottoman Empire. They brought with them their distinct customs, dialects and a sense of confessional-based identity that distinguish them from the followers of the Armenian Apostolic Church, one of the Oriental Orthodox Churches, which is the dominant religious institution among Armenians.

Armenian Catholicism formed at the junction of different cultures and for centuries was dependent not solely on the devotion of its believers but also on the politics, great and small, of Persian shahs, Turkish sultans, Russian tsars, French kings, Roman popes, communist commissars, Catholic missionaries and many other actors on the European and Middle Eastern scene. The first agreement between Rome and Armenian Christians was attempted in the times of the medieval Armenian Kingdom of Cilicia – an important ally of European crusaders fighting for the Holy Land. Both then and later, many Catholicoi (heads of the Apostolic Church) accepted papal primacy, simultaneously seeking Western Christian assistance against Muslim invaders. However, a lasting and universally acknowledged covenant was never reached. One of the results of Dominican and Franciscan missions to Armenia was the creation of the Catholic Diocese of Nakhichevan (today a territory within Azerbaijan), which rose in the 14th century and survived for some 400 years. Later missions to the Ottoman Empire by Jesuits and Capuchins were also fairly successful among Armenians. Over centuries, the Armenian-Catholic community’s struggle with its institutional identity led to numerous – and sometimes violent – conflicts and schisms, and was only partially resolved with the establishment of the Armenian-Catholic Patriarchate in Bzoummar (Lebanon) in 1742.

During the Armenian genocide in the Ottoman Empire (1915-1923), Armenian Catholics suffered devastating losses, as did the Armenian nation as a whole. Except in Istanbul, all the dioceses and parishes in the Empire were wiped out, while the majority of priests and believers were killed. One of them, Bishop Ignatius Maloyan was beatified by John Paul II in 2001.

In communist times, the Armenian Catholic Church in the former Soviet Union was disbanded, most priests lost their lives, and the temples were either demolished or turned into storehouses. Only a few communities in Georgia managed to defend their churches, where, despite the state’s anti-religious policies, people still gathered for prayer. In some other places, religious practices were “domesticated,” in terms set forth by anthropologist Tamara Dragadze (1990), while elsewhere, religious life was largely abandoned.

After the fall of the Soviet Union, the Armenian Catholic Church in Armenia and Georgia embarked on a process of reconstructing and reorganizing its religious life. A number of towns and villages have seen their old temples renovated or new ones erected. Clerics from Europe and the Middle East have been delegated to work in Armenia and Georgia along with newly-ordained local priests. At the same time, however, Armenian-Catholic communities have been weakened in recent years. The most significant reason is labor migration to Russia or other countries, which results in depopulation of Armenian-Catholic villages. Another issue is the rivalry over the “reign over souls” against the Armenian Apostolic Church, which promotes the idea of “one Church for the entire nation.” A final factor is the gradual departure from the traditional model of rural life and – consequently – the weakening of intergenerational transmission of cultural competencies, including religious beliefs and practices. 1 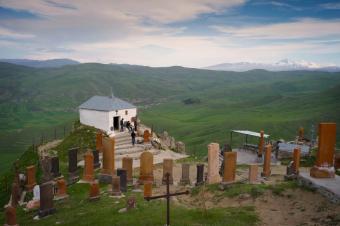 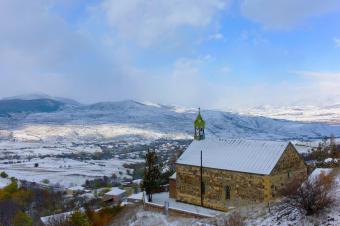 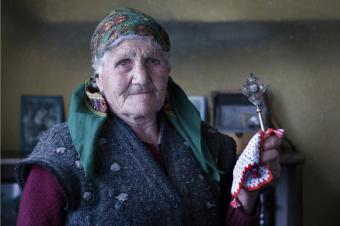 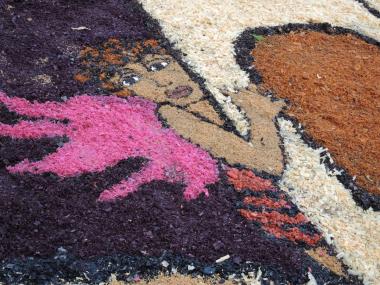